Mutations in the HTT gene cause Huntington disease. The HTT gene provides instructions for making a protein called huntingtin. Although the exact function of this protein is unknown, it appears to play an important role in nerve cells (neurons) in the brain. The HTT mutation that causes Huntington disease involves a DNA segment known as a CAG trinucleotide repeat. This segment is made up of a series of three DNA building blocks (cytosine, adenine, and guanine) that appear multiple times in a row. Normally, the CAG segment is repeated 10 to 35 times within the gene. In people with Huntington disease, the CAG segment is repeated 36 to more than 120 times. People with 36 to 39 CAG repeats may or may not develop the signs and symptoms of Huntington disease, while people with 40 or more repeats almost always develop the disorder. An increase in the size of the CAG segment leads to the production of an abnormally long version of the huntingtin protein. The elongated protein is cut into smaller, toxic fragments that bind together and accumulate in neurons, disrupting the normal functions of these cells. The dysfunction and eventual death of neurons in certain areas of the brain underlie the signs and symptoms of Huntington disease.

As the altered HTT gene is passed from one generation to the next, the size of the CAG trinucleotide repeat often increases in size. A larger number of repeats is usually associated with an earlier onset of signs and symptoms. This phenomenon is called anticipation. People with the adult-onset form of Huntington disease typically have 40 to 50 CAG repeats in the HTT gene, while people with the juvenile form of the disorder tend to have more than 60 CAG repeats.

Of the four described Huntington disease-like (HDL) syndromes, HDL4 appears to be the most common. HDL2 is the second most common and occurs almost exclusively in people of African heritage (especially black South Africans). HDL1 has been reported in only one family. HDL3 has been found in two families, both of which were from Saudi Arabia.

In about one percent of people with the characteristic features of Huntington disease no mutation in the HD gene has been identified. However, mutations in the PRNP, JPH3, and TBP genes have been found to cause the signs and symptoms in some of these individuals. HDL1 is caused by mutations in the PRNP gene, while HDL2 results from mutations in JPH3. Mutations in the TBP gene are responsible for HDL4
(also known as spinocerebellar ataxia type 17). The genetic cause of HDL3 is unknown.

One region of the JPH3 gene contains a CAG/CTG trinucleotide repeat.  Normally, the CAG/CTG segment is repeated 6 to 28 times within the gene.  People with HDL2 have 44 to 59 CAG/CTG repeats. People with 29 to about 43 CAG/CTG repeats may or may not develop the signs and symptoms of HDL2.

The PRNP mutations associated with HDL1 involve a segment of DNA called an octapeptide repeat. This segment provides instructions for making eight protein building blocks (amino acids) that are linked to form a protein fragment called a peptide. The octapeptide repeat is normally repeated five times in the PRNP gene. In people with HDL1, this segment is repeated eleven or thirteen times. An increase in the size
of the octapeptide repeat leads to the production of an abnormally long version of PrP. It is unclear how the abnormal protein damages and ultimately destroys neurons, leading to the characteristic features of HDL1.

It was estimated that about 10,000 people in Great Britain and 65,000 in the United States have Huntington’s Disease (formerly Huntington’s chorea).  There are currently two major groups of symptoms:

1.   adult-onset ( the most common) typically manifests in a person’s 30s or 40s. Challenges in the cognitive areas can include irritability, depression, small involuntary movements, poor coordination, and trouble learning new information or making decisions. The chorea refers to involuntary jerking or twitching movements. These worsen and make walking, speaking, and swallowing difficult.

2. juvenile-onset manifests in childhood or adolescence. Additional challenges include slow movements, clumsiness, frequent falling, rigidity, slurred speech, and drooling. Seizures occur in one third to one half of children with this condition. This variety tends to progress more quickly than adult-onset.

The Woman Who Walked into the Sea: Huntington’s and the Making of a Genetic Disease by Alice Wexler (2008 Yale University Press) is worth a read.

An exciting discovery was made after almost twenty years of studying people in two villages in Venezuela. A gene called HTT on chromosome 4 on the p16.3 region had a variable number of nucleotide repeats. The full explanation of what the Huntington protein does exactly still needs work.

Prof Sarah Tabrizi, director of University College London’s Huntington’s Disease Centre who led the phase 1 trial of a drug called Ionis-HTTRx, explained that the interception and destruction of a messenger molecule prevents  the harmful protein from being made. We’ll see what the actual paper reads like and whether the drug scales up safely.

Dr. Robert Bacher will present a Chen Style Tai Chi Instructor Certification Training in Costa Rica March 1 – 31.  He is a long-time student of the esteemed Grandmaster Wang Xi’an. This is a 30 day/150 hour training, and there are 3 levels – this will be Level I.

For information about the event:

As most readers are likely aware, Pittsburgh Steelers linebacker Ryan Shazier was seriously injured in the game Monday night. As of 10 AM Pacific time there has not been a medical update as to the extent of damage to his spine. 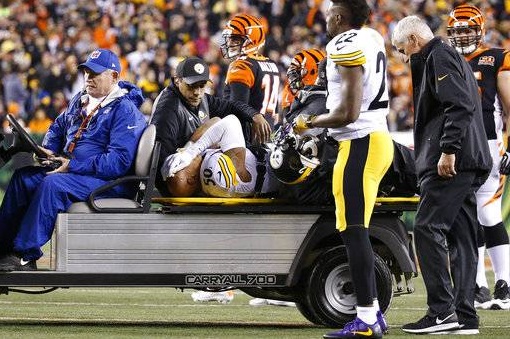 Less known to some is that Ryan Shazier had a difficult time growing up because he had alopecia or hair loss. Like many conditions, alopecia has a range from little or no hair on small parts of the scalp to universal hair loss. There are at least 48 genes implicated in various types of alopecia.  Ryan Shazier spent a lot of time and effort into speaking at schools about the need for compassion for people with alopecia. One of the good guys.

On page 267 of volume 4 of Grandmaster Chen Zhenglei’s series of books on Chen Family style Tai Chi Chuan during a discussion of the weapons known variously as batons or maces it is mentioned that “There is a hole at the end of the handle for a rope to wrap around the wrist”. I have mixed feelings about the wrist straps. Yes, the stick is then unlikely to hit someone else (or the teacher, which might well be me). The stick probably won’t hit the floor which is likely to be good for the stick and the floor. However, the person holding the stick (until a second ago) might hit their own knee. My enthusiasm for drilling holes in the sticks was not high to begin with as I was worried about the stick cracking from drilling as well as the consequences of the drilled end of the stick being used to hit something. My enthusiasm has decreased after an incident. We were using single padded sticks. They come in black. One of the arthrogryposis students has grip problems as one might expect. Well, they almost all have grip problems, but hers are the most severe. So we were using a single padded stick to do some simple circles much like silk reeling. For her we had tied a piece of double-thick yarn around her wrist and the stick. I am informed she has had that sort of thing done with pencils and paintbrushes. For some reason she is fine with forks and spoons (nothing tied). I assumed this difference is due to the grip used. We had done the exercises five times before. In the middle of the movements this day she suddenly screamed and started shaking her arm to try and get rid of the stick. Her aide and I converged very quickly and I caught the stick. No one was hurt, but no is really sure what was going on. We’ve been fine since, despite it being a little unnerving. It might have been a visual hallucination (her parents’ guess) or some sort of pain or tactile sensation in the palm from holding the stick or in the forearm where the yarn was tied (the aide’s theory). We could not tell from the video if she was holding the yarn and the stick (so increased pressure against the palm) but I don’t think so. After some discussion we went with no yarn at all.

Niujiao Guai [Niújiǎo Guǎi]
The Ox-Horn Crutch is a traditional weapon used mostly in northern China. It is part of the Guai (Crutch) family of weapons. I mentioned this in the context of a previous post about the Bodhidharma Cane and the Shaolin Cane. This family of weapons has designs that are based on or resemble the traditional Chinese crutch. The Ox-Horn crutch as made by Grandmaster Wing Lam (sold out, alas) is heavy and focuses almost exclusively on “twirling” strikes. His website says

“The Kung Fu Ox Horn Double Crutches are custom made by Sifu Wing Lam. These are a very rare Chinese Kung Fu weapon. Similar to the tonfa but much longer and thicker. The Kung Fu Ox Horn Double Crutches are made from Palope Wood a very dense wood. Each crutch body is 25.75″, the handle area is 3.75″ and to the end of head is 5″. The dagger part is 8.25″ long and 2″ wide. The overall length of the handle and dagger is 13.25″. The diameter at thickest part of body is 2″. Both crutches together weigh 6.20 lbs. The handle area is attached to the body by mortise and tenon joint method then pinned. You will never find a pair of Kung Fu Crutches made of this quality if you find them at all. We only have one pair (long since sold out) and once sold will not be available again. The Ox Horn Double Crutches are not new but are Sifu Wing Lam’s personal weapon for sale…”

Curly Birch on the left; Quilted Maple on the right

The reactions here to the two pieces are quite different: for the most part there seems to be an expectation that the spirals are more three-dimensional than they really are. I don’t detect anyone who expects the spirals to be colder or hotter, but it is often not easy (for me) to understand what is going on. Several of the students have licked them to verify and others have brought the bang very close to their eyes. There’s a fair amount of tracing the spiral by slowly rolling the bang on a table.  The maple is a whole different thing. There’s quite a bit of fascination with all the different grains or grainettes. It is very odd as the students don’t usually speak to each other yet they delight in drawing attention to the various visually different areas. They may actually feel some differences – I am not sure. I feel somewhat like Merry and Pippin at the Entmoot in Fangorn in The Lord of the Rings. There’s communication going on but what is being communicated is a mystery to me

The two chi dus made of birch and of quilted maple by Charles Tauber of Canada arrived. 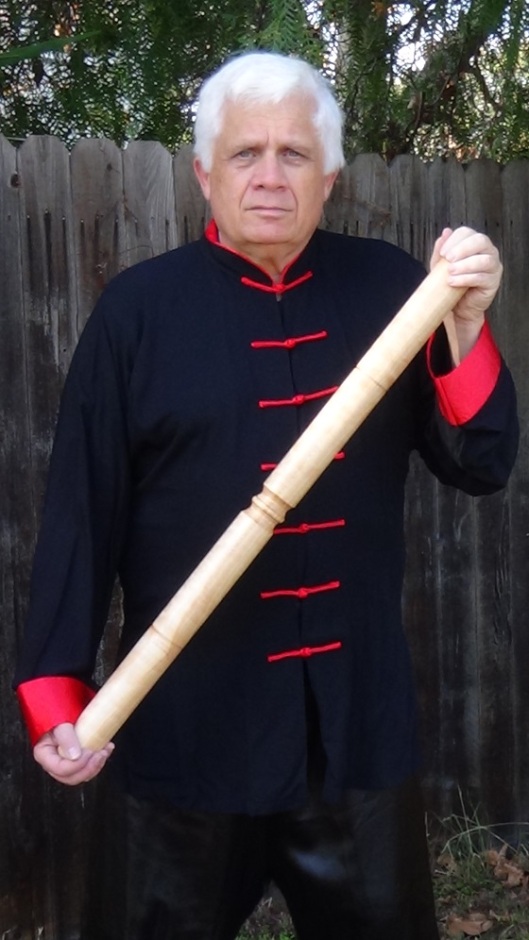 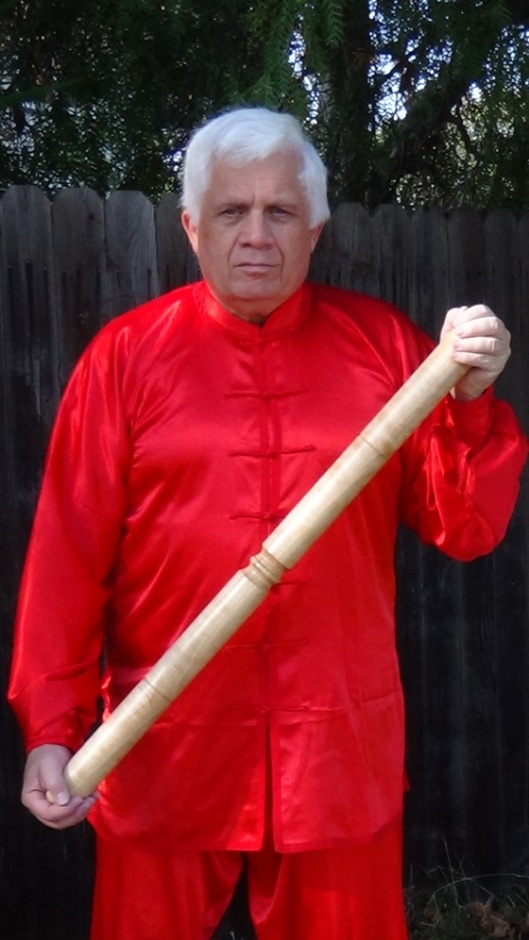