Note that the Imperial Japanese Navy built eight battlecruisers between 1907 and 1915. Four were in use at the start of World War II: Hiei, Kirishima, Haruna and Kongo. The first two were sunk in November 1942.

By year of commission

Although 1932 clearly showed Japanese shipyards could produce it would be reasonable to expect one or perhaps two heavy cruisers per year. The Ibuki was started in April of 1942 and launched in May of 1943. She was never completed – the decision was made to convert her into a light aircraft carrier in December 1943. That work was suspended in March of 1945 in favor of construction of small submarines. A sister ship to Ibuki was started in June 1942 but then stopped in favor of work on the carrier Amagi. It is hard to understand why there were no more heavy cruisers produced after Tone in 1938 and Chikuma in 1939.

American losses at the Battle of Savo Island were high: heavy cruisers Canberra, Vincennes, Astoria and Quincy were sunk and Chicago was under repair until January 1943. Of the destroyers Ralph Talbot was under repair in the U.S. until November 1942 and Patterson was repaired locally.

On the Japanese ledger heavy cruiser Aoba was hit by up to forty 6-inch and 8-inch shells. The bridge was wrecked, the No. 2 turret was knocked out and the No. 3 turret destroyed. Other hits put four of the Aoba’s boilers off line. Admiral Goto was mortally wounded and 80 other crewmen were killed. Somehow, she made it back to Shortland and from there to Truk and Japan where repairs took four months.

Heavy cruiser Furutaka was sunk as was destroyer Fubuki. The next day destroyers Natsugumo and Murakumo were sunk by land-based planes while trying to assist the cruisers.

A victory for the Americans in most respects. The Japanese Navy could not afford to trade ship losses at anything close to a 1:1 ratio.

A consideration for Admiral Mikawa after his impressive victory at the battle of Savo Island (August 8-9 1942)  was that there were no (zero) replacements afloat or under construction for his heavy cruisers. One might infer that the Imperial Japanese Navy planners did not consider heavy cruisers to be a useful asset, especially in terms of steel and fuel. Accordingly, perhaps losing one or more of his heavy cruisers in exchange for some or many American transports should have been indicated. He was not aware that American carriers would be beyond their attack range. He did have to consider how much ammunition his ships had left and what threats he might face from land-based planes. Before attacking the transports he would have had to fight the cruiser HMAS Australia (8 eight inch guns; at that point almost 20 years old; she did survive the war) and seven destroyers with his seven cruisers and one destroyer. Assuming all the Allied ships were sunk, the question would be how much ammunition remained to attack transports.

Asama – completed in 1899; by 1942 a stationary gunnery training ship at Shimonoseki.

Azuma – completed in 1900; stricken from the navy list, hulked, and disarmed in 1941. On 18 July 1945, she was badly damaged by US Navy aircraft attacking Yokosuka.

Izumo – completed in 1900 (shown below at anchor in Shanghai 1937); on December 8 1941 at Shanghai sailors from Izumo captured the US river patrolboat USS Wake (PR-3; formerly USS Guam PG-43). Wake was the only US ship that surrendered during WWII.  Wake‘s history is a blog article in itself – she was transferred to the pro-Japanese Wang Jingwei regime; recaptured by the US Navy in 1945; transferred to the Nationalist forces in 1946; captured by the Communist forces in 1949 and served in the Chinese Navy for almost 15 years. Izumo assisted in the sinking of British gunboat HMS Peterel also on December 8.

On December 31, 1941, Izumo struck a mine in the Lingayen Gulf off the Philippines. She was towed to Hong Kong for repairs and returned to Japan in late 1943. Izumo was reclassified as a training ship for the Kure Naval District. She struck a mine in Hiroshima Bay April 9, 1945 and was eventually sunk when near-misses by US Navy aircraft sprang the ship’s seams on July 28, 1945. 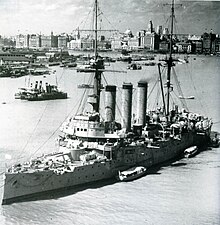 Kasuga – originally built in Italy for Argentina in 1902, she was ultimately sold to Japan. Kasuga was hulked and disarmed in July 1942 and used as a floating barracks during WWII.  On 18 July 1945, she was badly damaged  by US Navy aircraft attacking Yokosuka. Kasuga eventually capsized at her mooring.

Nisshin – like Kasuga, she was originally built in Italy for Argentina in 1903, and ultimately sold to Japan. She became a training in 1927 and was sunk as a target ship in 1936. Her wreck was later re-floated and re-used as a target in 1942: towed by the battleship Mutsu, the wreck was shot at by the Yamato.

Tokiwa was completed in 1899 and converted to a minelayer in 1922. She supported several naval campaigns in 1941 and early 1942. Tokiwa was damaged by mines twice in 1945. Additional  damage by American aircraft forced Tokiwa’s crew was forced to beach her at the end of the war.

Yakumo was built in 1900 and by the 1920s was used as a training ship. She survived the war and was used as a repatriation vessel during 1946.

By November 1942 in the southern Pacific the only surviving aircraft carrier is the Enterprise, although the repaired Saratoga will depart Pearl Harbor November 12 and was expected to arrive at Fiji on or about November 22. Saratoga stayed a week, took about five days to sail to Noumea (840 miles) and then had to be repaired for two more weeks. It would be about 1000 miles from Noumea to Guadalcanal.

When the Enterprise withdrew in May of 1943 the Saratoga was joined by HMS Victorious for almost three months until two new Essex class carriers departed Pearl Harbor. Since the Japanese had a four to two carrier advantage during this period it is difficult to understand why the Imperial Japanese Navy was not much more aggressive.

Fleet carriers to be delivered:

Essex (CV-9) – lead ship of the 24-member Essex class. She was commissioned in December 1942; had a rated speed of 33 knots and carried 80 to 90 aircraft. She sailed from Pearl Harbor in May 1943 and participated in airstrikes against Marcus Island at the end of August.

Yorktown (CV-10 renamed from Bonhomme Richard in honor of CV-5)  Commissioned April 15, 1943 and reached Pearl Harbor from Virginia on July 24. She joined Essex for the attack on Marcus Island and, later, the attack on Wake.

Hornet (CV-12 named in honor of CV-8) – commissioned November 29, 1943. She reached the Pacific frontlines in February 1944. By then American carrier supremacy was clear.

Light carriers to be delivered:

Independence (CVL-22) commissioned on 14 March 1943. She was originally started as the Cleveland class light cruiser  Amsterdam (CL-59). She arrived at Pearl Harbor in July 1943 and joined Essex and Yorktown for the attack on Marcus Island and, later, the attack on Wake. All the ships in this class carried about 33 planes and had a rated speed of 32 knots.

Princeton (CVL-23) commissioned on 14 March 1943. She was originally started as the Cleveland class light cruiser Tallahassee (CL-61). She arrived at Pearl Harbor August 9, 1943.

Cowpens (CVL-25) commissioned on 28 May 1943. She was originally started as the Cleveland class light cruiser Huntington (CL-77). She arrived at Pearl Harbor November 19, 1943.

Monterey (CVL-26) commissioned on 17 June 1943. She was originally started as the Cleveland class light cruiser Dayton (CL-78). She arrived at the Gilbert Islands in November 1943.

Cabot (CVL-28) commissioned on 24 July 1943. She was originally started as the Cleveland class light cruiser Wilmington (CL-79). She arrived at Pearl Harbor December 2, 1943.

Bataan (CVL-29) commissioned on 17 November 1943. She was originally started as the Cleveland class light cruiser Buffalo (CL-99). She arrived at Pearl Harbor March 22, 1944.

If Admirals Nimitz and Yamamoto wanted to raise the bets in the great game of Pacific Ocean supremacy Guadalcanal presented an opportunity for both sides. Effectively, the United States Navy had available two modern battleships, with an additional one being repaired and another due to arrive in late November as well as two older battleships.The older ships were:

Colorado and Maryland were near Fiji by mid-November – 1200 miles east of Guadalcanal. Presumably, held in reserve because of concerns about their speed and armor.

The newer battleships assigned to the Pacific were

North Carolina (BB-55; commissioned April 1941; 9 16 inch guns; 28 knots rated speed) had been torpedoed in September and was being repaired at Pearl Harbor.

Washington (BB-56; commissioned May 1941; member of the North Carolina class)

Indiana (BB-58; commissioned March 1942; a member of the South Dakota class), acted as a replacement for the North Carolina, and arrived in late November of 1942.

Massachusetts (BB-59; commissioned March 1942; a member of the South Dakota class) but slated to be assigned to duty in the Atlantic in late 1942.

Alabama (BB-60; commissioned August 1942; a member of the South Dakota class) was also scheduled for Atlantic duty. She arrived in the Pacific in September of 1943.

Illinois (BB-65) and Kentucky (BB-66) were both intended to be members of the Iowa class. Construction was started with expected completion in late 1945. Neither ship was completed. Five ships of the Montana class with 12 16 inch guns were designed but cancelled.

One may infer that other five older battleships like Wyoming (BB-32; by 1941 being used as a training ship); Arkansas (BB-33 and sister of Wyoming), New York (BB-34), Texas (BB-35), and Nevada (BB-36) were judged to have insufficient armor and speed. Note that Nevada was the first US battleship to have triple gun turrets and burn oil. Oklahoma (BB-37) was the sister of Nevada but was deemed too damaged to repair after Pearl Harbor. Pennsylvania (BB-38) was in dry dock and was damaged at Pearl Harbor, but was repaired by summer of 1942. Her sister ship Arizona (BB-39) was much less fortunate.

The three ships of the New Mexico class – New Mexico (BB-40), Mississippi (BB-41) and Idaho (BB-42) had all been built at the end of WWI and were judged to have insufficient armor and speed.

Tennessee (BB-43) and her sister ship California (BB-44) were rebuilt after Pearl Harbor. Admiral Nimitz had a fuel problem: Tennessee and sister battleships and their escorts based in San Francisco were excluded from the Guadalcanal invasion task force because there were just seven oil tankers. Task Force 1, including its escorts, burned ten thousand barrels of oil per day = the total oil storage capacity of the Pacific theater at that time. A carrier task force needed almost as much, so the Navy had to choose whether to operate carriers or battleships.

Washington (BB-47) was a Colorado class ship that was cancelled in 1922.

West Virginia (BB-48) was also a Colorado class ship. She was raised after Pearl Harbor and returned to active duty in July 1944.

Note that six ships of the proposed South Dakota class (BB49-BB54) were cancelled in 1922.

Mississippi, Maryland, West Virginia, Tennessee, California and Pennsylvania all fought at the Battle of Surigao Strait.

Admiral Yamamoto had a much different problem: he had local superiority because he had available Hiei, Kirishima, Haruna, Kongo and Yamato with Musashi on the way (expected in 1943). But that was all in terms of battleships. He had the same problem as Admiral Nimitz – was there any use for the older battleships Fuso, Yamashiro, Ise, Hyuga, Nagato and Mutsu. Admiral Yamamoto faced much more limiting constraints on fuel and ammunition. He knew if the United States could avoid crushing defeats, America would out-build Japan, and the Japanese initiative would be lost.

It was clear to both sides that Japanese forces would have to destroy American aircraft carriers and neutralize the land-based planes at Henderson Field.